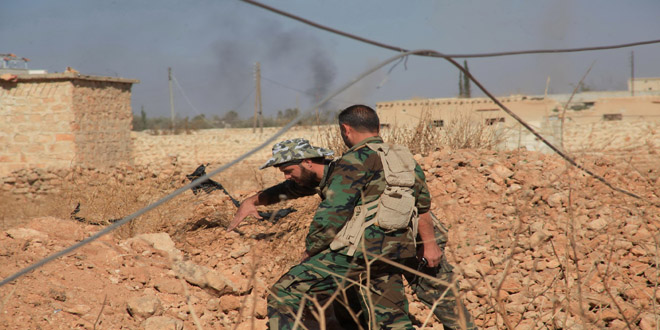 Provinces, SANA- Units of the army and armed forces killed more terrorists in accurate operations against their hideouts and dens in the southern part of the country, and established control over more areas in the coastal region.

In the coastal province of Lattakia, an army unit, in cooperation with the popular defense groups, established control over al-Rashwan hill in the northern countryside of the province.

This achievement came less than 48 hours after the army established control over the villages of Deir Hanna, al-Daghmashliyeh, Bait Aiyash and Medakhat Ghmam area in the northern countryside after inflicting heavy losses upon the Takfiri terrorist organizations in personnel and equipment.

The army also advanced towards Hawarin village following its control on al-Hadath yesterday.

Units of the army and armed forces killed a number of the Takfiri terrorists’ leaders in intensive operations carried out last night in the southern Daraa province.

A military source told SANA that a unit of the army destroyed vehicles and dens of the terrorist organizations’ leaders to the south of al-Arab’ain School, and destroyed terrorists’ positions in al-Manshiyia neighborhood
and to the south of Bosra Square in Daraa al- Balad area.

In the northern countryside of the province, heavy losses were inflicted upon Jabhat al -Nusra terrorists in precise strikes carried out by a unit of the army against one of their positions to the northwest of al-Gharyia al-
Gharbyia Bridge.

Meanwhile, the Takfiri terrorist organizations acknowledged on their accounts on the social networking websites that a number of their members were killed.

In the western countryside of the province, 14 terrorists from the so-called al-Muthana Islamic Movement were killed and others were injured in Tafas town after the explosion of a number of explosive devices which they were
making inside one of their dens.