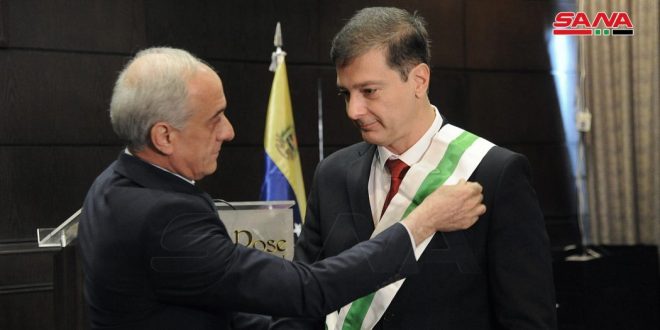 Damascus, SANA- Foreign and Expatriates Ministry on Sunday held a farewell ceremony for the Ambassador of the Bolivarian Republic of Venezuela in Damascus, Jose Gregorio Biomorgi Muzattiz on the occasion of the end of his diplomatic mission in Syria. During the ceremony, Assistant Foreign and Expatriates Minister Ayman Sousan awarded the Ambassador Biomorgi the Syrian Order of Merit of the Excellent Degree in appreciation for his friendly country and noble personality.

The Ambassador thanked President Bashar al-Assad for awarding him this Order of Merit, considering it as incentive to continue working to strengthen bilateral relations and convoy the reality of the war imposed on Syria to the world.

He underlined that Syria’s victory and the steadfastness of its people in the face of the terrorist war are changing history and paving the way for the formulation of a new multipolar world. He indicated that his country faces a similar war waged by the hegemonic powers in the world today.

Speaking to the journalists, Sousan affirmed the deep-rooted friendship relations between Syria and Venezuela, and the two peoples of the two countries share the same suffering and face US conspiracies and unilateral coercive measures.

He voiced confidence that Venezuela, with the revolutionary legacy of leader, Hugo Chavez, will win against the plot just as Syria did. 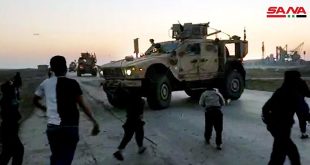