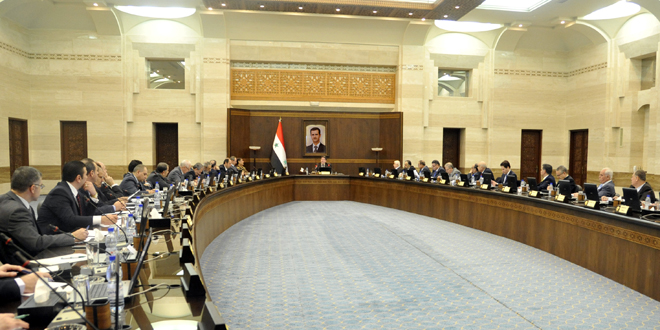 Damascus, SANA – The Cabinet discussed in its weekly session on Tuesday a number of economic and services issues, including mechanisms for establishing strategic industrial projects in parallel with small and micro projects.

Chairing the session, Prime Minister Wael al-Halaqi asserted the government’s commitment to launching strategic industrial projects in parallel with smaller projects, underlining the role that the recently-launched “Mashroue” (My Project) program in improving the living conditions of around 63,000 beneficiaries.

Al-Halaqi also reviewed the results of his visits to Homs and Tartous provinces where he inaugurated and laid the foundation stones of scores of services and economic projects with an overall value of SYP 25 billion.

He noted that despite the war and the economic embargo imposed on Syria, the government managed to invest tens of billions of Syrian Pounds in development and industrial projects that helped improve national economy.

The Premier affirmed the government’s commitment to supporting national industries and combating all forms of smuggling to protect local products.

Al-Halaqi called for improving the investment in national resources by focusing on renewable and alternative energy sources.

For his part, Deputy Prime Minister for Services Affairs, Local Administration Minister Omar Ghalwanji briefed the Cabinet on efforts being made to improve the services sector, particularly in Aleppo province.