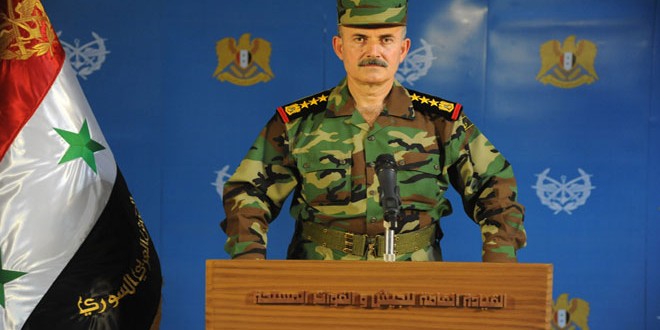 The statement said that the various divisions of the Army and Armed Forces, and under concentrated cover fire from the Air Force and artillery and missile units, army units made remarkable achievements in its operations in the northern countryside of Hama province.

The statement said that operations on both sides of the administrative line between Hama and Idleb provinces resulted in the elimination of many terrorists, the destruction of a number of armored vehicles and ammo depots in al-Tamane’a, Sekik, and Tal Sekik, in addition to five machinegun-equipped vehciles three US-made TOW missile launch pads in Oum Harten.

The General Command said that the army also targeted command centers and concentrations of terrorists in Tal A’as, Ruwaiset al-Qubour, Sama and Melouhet Katef al-Ghadr in the countryside of Lattakia province.

The statement went on to say that army units established full control over the entirety of the Free Zone area in Aleppo province after inflicting heavy losses upon ISIS terrorists and directing concentrated strikes on terrorists’ concentrations in the surroundings of Kuwairis Airport, confirming that this resulted in destroying terrorists’ command centers, weapon and ammo depots, and vehicles equipped with weapons.

The General Command stated that the successes achieved since the beginning of the wide-scale ground operation conducted with air and artillery support have resulted in inflicting heavy losses upon terrorist organizations, causing their morale to collapse and prompting large numbers of them to flee towards Turkish borders.