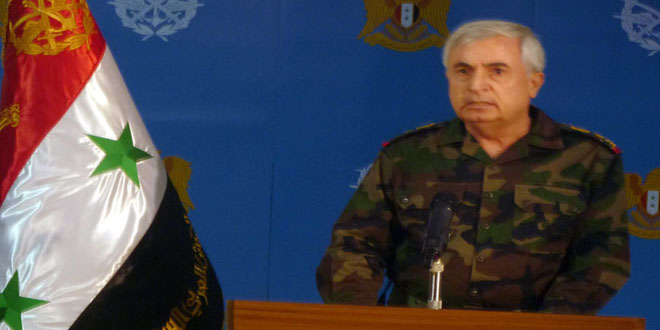 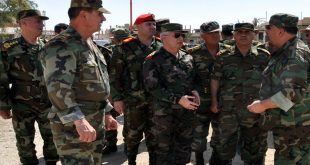 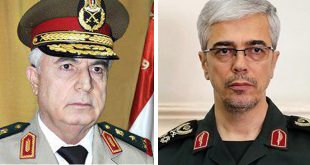 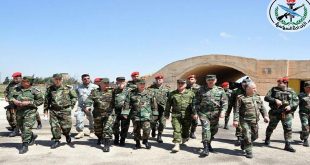 Provinces, SANA- Chief of the General Staff of the Army and Armed Forces, Gen. Ali Abdullah Ayoub said following the Russian airstrikes against the Islamic State in Iraq and Syria (ISIS) and other terrorist organizations, which have reduced the combat capabilities of the terrorists, the Syrian armed forces have taken the reins of military operations and formed well-armed and equipped human forces, mainly the “4 th Corps Storming”.

In a statement on Thursday, Gen. Ayoub announced that the Syrian armed forces started today a large-scale assault aimed at uprooting the gatherings of terrorists and expelling them from the areas and towns which have been suffering of the woes and crimes of terrorism.

Hundreds of ISIS terrorists were killed in Russian airstrikes that targeted their positions in the countryside of Aleppo province, a military source confirmed on Thursday.

The source explained that the Russian Air Force, in cooperation with the Syrian Air Force, conducted a series of “precise” airstrikes on several ISIS targets in Andan, al-Atareb, Deir Hafer, al-Mansoura and al-Bab in Aleppo.

Hundreds of terrorists were confirmed dead, and tens of armored vehicles, two Grad rocket launchers and a huge ammunition depot were destroyed as a result of the airstrikes, the source added.

In the same context, 27 Jabhat al-Nusra targets in Lattakia province were destroyed in Russian and Syrian air strikes.

Coinciding with the air strikes, the army units continued operations in various areas in Aleppo, with the armed forces defending the Air Force Academy in the countryside destroying vehicles for ISIS terrorists equipped with machine guns in the Academy’s vicinity.

A number of ISIS terrorists were killed or injured, and several machine guns, an armored vehicle and a depot were destroyed during army operations last night in the villages of Huweijineh and al-Salehiyeh in the eastern countryside of the province.

Jabhat al-Nusra-linked terrorist organizations suffered heavy losses at the army units’ hands in the surroundings of the Scientific Research Center and in al-Mansoura village in the western countryside.

Scores of Jabhat al-Nusra terrorists were killed during army operations in the neighborhoods of Salah Eddin, al-Lairamoun, Bani Zaid, Karm al-Jabal, al-Zibdiyeh and al-Ashrafiyeh in the city of Aleppo.

In the town of al-Bab, 38 km northeast of Aleppo city, local sources confirmed to SANA that hundreds of ISIS terrorists have been fleeing the city under the army’s strikes.

Meanwhile, field sources told SANA that operations against terrorists over the last 24 hours resulted in the destruction of 11 armored vehicles and 35 cars transporting terrorists, weapons and ammunition in Deir Hafer, al-Atareb and al-Bab areas.

Army units killed ISIS terrorists and destroyed a vehicle equipped with a machinegun in operations carried out against their dens in the villages of Bir Hafar and al-Hadath in the eastern countryside of Homs central province.

20 terrorists killed while rigging a car bomb in Lattakia, includign a Saudi officer

SANA reporter in Lattakia province said 20 terrorists were killed as a car they were rigging with explosives exploded in Rabiaa area in the northern countryside of the province. A Saudi officer, who was an explosives expert, was identified among the dead.

Army units destroyed armored vehicles and dens for the so-called Jaish al-Fateh terrorist organization during the large-scale military operations carried out by the Syrian army with a cover from the Air Force as part of the war against terrorism in the northern and north eastern countryside of Hama.

A military source said in a statement to SANA that these operations left 32 terrorists dead while 38 others were injured and four armored vehicles and three canons were destroyed.

Field sources told SANA reporter that army units achieved great advance in different axes of clashes with terrorists who lost scores of their members while others fled away leaving their arms and ammunition behind.

Chief of the General Staff in the Syrian Army General Ali Abdullah Ayoub announced on Thursday morning the start of the military operation which aims at eliminating terrorist organizations in areas and towns that suffered from terrorism.

Daraa, SANA- Two children were martyred and two civilians were injured in a blast of …