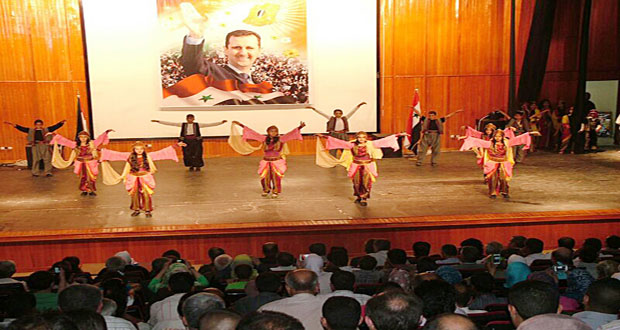 Qunaitera,SANA,Qunaitera city held a massive celebration Thursday On the occasion of hoisting Syrian flag in the City’s main square.

The participants affirmed confidence that Syria will come out of the crisis Victorious thanks to Syria’s citizens and army in confronting foreign-backed terrorism to which the country is exposed.

Member of al-Baath Arab Socialist Party’s Regional leadership, Arkan al-Shoufi, said “We will continue the battle of liberating every bit of Golan soil to restore it to the Syrian sovereignty.” He hailed the role of the Syrian Arab Army in confronting the global conspiracy hatched against Syria by colonial forces.

For his part, Al-Baath Party’s secretary in Qunaitera Walid Abaza stressed that Syria will be a grave for the invaders, mercenaries and traitors who sold themselves and country for money.