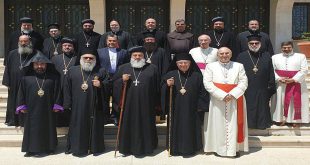 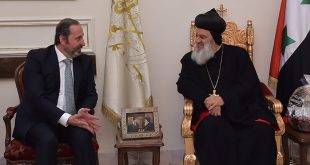 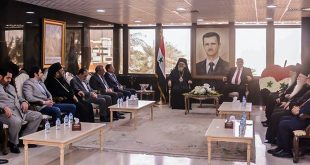 Damascus, SANA-The participants in the spiritual meeting of the Patriarchs of Antioch and All East in Damascus affirmed their commitment to preserve Syria’s unity and the rights of its people to live in safety, urging the world to exert serious efforts to find out a political solution for the crisis in Syria.

At the end of the meeting, the participants issued a closing statement which affirmed that” the Syrian people are exposed to terrorism backed by foreign powers to divide Syria, ruin its civilization and displace its people.”

The statement called for a solution in Syria that guarantees peace, ensures the return of the kidnapped and displaced persons and preserves the Syrians’ right to self-determination without any foreign interference.

The statement also called for unity among Christians to combat terrorism side by side with their “Muslim brothers.”

The statement appealed for the Christians to pray for their countries and for the aggrieved and kidnapped people, particularly bishops Yohanna Ibrahim and Boutros Yazigi.

The spiritual meeting of the Patriarchs of Antioch and All East started Monday at the St. Anthony Cathedral, the Maronite Catholic Archeparchy of Damascus.

“Today we speak on behalf of the fighters who defend their livelihood and sacrifice their lives to combat terrorism, Takfiri mentality, indiscriminate abduction, crippling siege, and the destruction of coexistence symbols to say ‘enough’ to destruction and to burying of humanity and its culture in their native lands,” Yazigi said during the meeting.

“The scene of the brothers meeting, of the Patriarchs of Antioch gathering in Syria at this situation and specifically in Damascus, is a true message to the people of the Levant and the whole world”, His Beatitude said, adding that this meeting aims at launching a call for peace, a message of reconciliation, and a historic stand in the face of the events that are developing at a rapid pace in the region.

The Patriarch accused the international community, the UN forums and all other international and governmental organizations of negligence towards the “bleeding wounds” in Syria, Lebanon, Iraq, Egypt, Yemen, Libya, and Palestine, calling upon these international bodies to stop infringing upon the sovereignty of the states in the Orient.

Patriarch Yazigi said that the Christians and other moderate people, both the minorities and the majorities, are paying the price of displacement, terrorism and Takfiri mentality.

“We are determined to remain as we have always been, and we will stay in this Orient. Despite all the circumstances which force our sons to leave their homeland and despite the difficulties and misery of the current days, we say and repeat that the homeland is an identity, and the land to us is an identity,” Yazigi went on to say, wishing for the restoration of peace in the Orient.

For his part, Cardinal al-Rahi expressed great pleasure for participating in the meeting , voicing concern over finding means to keep the Christians of the region in their homeland. 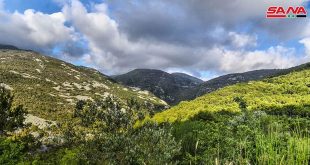