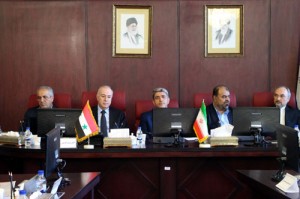 Tehran, SANA – Means of enhancing economic and trade cooperation between Syria and Iran and finding new mechanisms for implementation of the economic, commercial and technical agreement signed between the two countries were discussed during a meeting between Secretary-General of the Cabinet, Taysir al-Zoubi and Iranian Minister of Economic Affairs and Finance Ali Tayebnia in Tehran on Monday.

Talks during the meeting dealt with the issue of the Iranian credit line and mechanisms of carrying it to meet the requirements and priorities of the Syria of oil, basic materials, food and medicine and financing some other needed projects.
Both sides discussed the cooperation agreement on the maritime transportation among Lattakia, Tartous and Iranian ports to facilitate the flow of the Iranian goods into Syria.

Al-Zoubi stressed the importance of economic dimension in supporting the Syrian people, reiterating the necessity for work in various domains and economic sectors for best benefiting from the available potentials far from routine for achieving the interests of the Syrian and Iranian People.

He hailed Iranian government and people’s support to Syria against the global war targeting it and against the economic siege targeting the livelihood of the Syrian people. Al-Zoubi stressed that Syria will triumph over the Takfiri terrorist ideology due to the sacrifices of its people, wisdom of its leadership and support of its friends.

Both sides held several meetings among the technical committees where they discussed all frameworks and mechanisms which can efficiently contribute to enhancing the Syrian economy and eliminating all obstacles facing the cooperation process between the two sides in various fields.