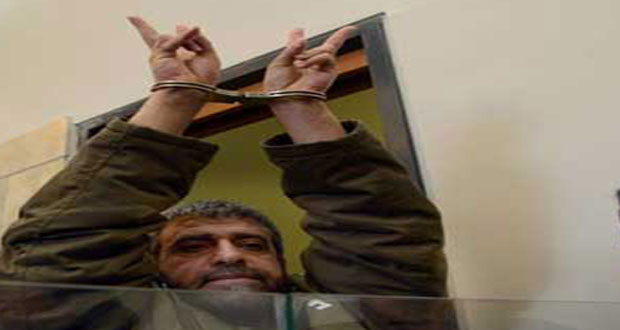 Quneitra, SANA – Israeli occupation authorities extended on Wednesday the detention of the Syrian Sedqi al-Maqt for the second time and postponed his trial till June the 3rd, in another transgression against the international laws.

The Zionist entity previously set May 23rd as the date for al-Maqet’s trial. Al-Maqt, a resident and freedom-fighter in the Israeli-occupied Golan, is a long-time prisoner. He had spent 27 years in Israeli jails before his release in 2012.

He was re-detained Last February. On May 20, 1986, the so called “military court” in Al-Led city issued an unjust verdict against al-Maqt and some of his companions, including his brother Bishr al-Maqt, Assem al-Wali and the now martyred Zaid Abu Hayel and Seitan al-Wali among others.

The prioners faced the court’s unfair arbitrary measures courageously. In August 2012, the Israeli occupation authorities released Sedqi al-Maqet following 27 years in continuous imprisonment in the Israeli jails, only to re-arrest him on February 25th after storming his family’s home, messing with its contents and seizing mobile phones and a computer without any justification for such blatant assault.

Israel continues to impose hostile and aggressive measures against the Syrian citizens in the Golan, occupied since 1967, in clear violation of the Geneva (IV) Convention relative to the protection of civilians under occupation.