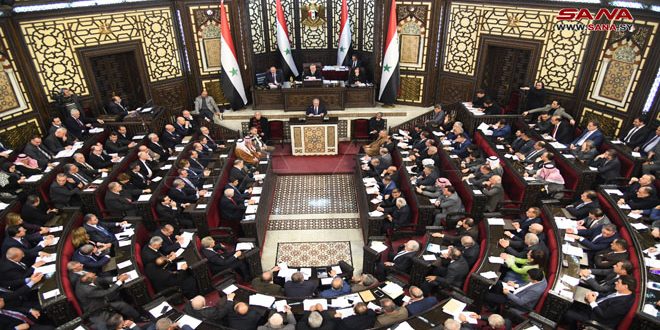 Damascus, SANA- The People’s Assembly on Sunday held its 1st session of the 8th ordinary round of the 3rd legislative term chaired by its Speaker Hammouda Sabbagh, in presence of Prime Minister Hussein Arnous and a number of Cabinet Members. to discuss the government’s agenda of the upcoming phase and the available tools to carry out it.

Sabbagh stressed, in a speech at the beginning of the session, that the Assembly and the Cabinet will work together in the context of general national action, and on all levels in a way to contribute to remove the obstacles that face this action due to the unjust blockades and the unilateral coercive economic measures imposed by the hostile and occupation powers on Syria, in addition to occupying parts of the Syrian lands and plundering its resources and wealth which negatively affects the livelihood of the people. Sabbagh called for sparing no efforts and continuing constructive work to meet the requirements of the people according to the available potentials, and in light on president Bashar al-Assad’s directives, wishing the wounded and the injured quick recovery.

Arnous , in turn, briefed the Assembly on the government’s overall work and what has been carried out in all economic and service sectors, adding that the impact of international repercussions and shifts on the national economy was greater than on the rest of the countries, due to the situation Syria is passing through as a result of the war against terrorism and its supporters for nearly 12 years. Premier Arnous pointed out that a number of economic, monetary and administrative measures and decisions have been taken to control the exchange market, according to available potentials, asserting that the government continues hard work to tackle problems and achieve clear results on the economic and service levels to meet the needs and requirements of citizens in various fields and sectors.