Mikdad: Any Turkish aggression on the Syrian territories would destabilize peace and security in the region 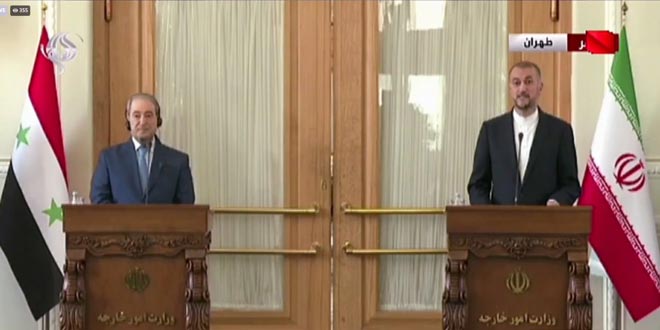 Tehran, SANA-Foreign and Expatriates Minister, Fayssal Mikdad, stated that any Turkish aggression on the Syrian territories and establishing the  so-called “safe zone” would destabilize peace and security in the region.

During a joint press conference his Iranian counterpart Hossein Amir Abdollahian in Tehran, Mikdad said” We reject the Turkification policies and the Turkish interference in Syria’s internal affairs, and all illegal foreign forces on the Syrian territories have to leave “.

“President Bashar al-Assad conveyed his warm greetings to Supreme Leader of the Islamic Revolution in Iran and President Ebrahim Raisi, and we are satisfied with the efforts made by the Iranian side to come up with a balanced declaration at the summit of the guarantor states of Astana process (Russia، Iran and Turkey) in Tehran on Tuesday that reiterated the unity, sovereignty and independence of Syria, and this is what all Security Council resolutions on Syria have always stressed”, Mikdad said.

“We see the outcomes of Tehran summit as positive, despite the Turkish side’s attempts to impose its agenda on the meeting, but this was not achieved due to the serious discussions and opinions put forward by Iranian and Russian friends in this regard, which prevented the other party from achieving the goals it was seeking for,” Mikdad added.

He added Syria calls on all its refugee citizens who were forced by terrorism to leave to return to the homeland, indicating that the real problem is that Western countries are obstructing this return and there are decisions taken in the so-called Brussels Conference and in Western capitals to exploit refugees to serve their political schemes.

“In addition to that, these countries continue their economic blockade on Syria to tighten the noose on its people and obstruct the return of refugees,” Mikdad underlined.

He recalled that “the American occupation forces continue to loot Syrian resources in cooperation with their   separatist militias, these militias should not seek protection from the foreigner and should to return to the homeland.”

He stressed that “those affiliated to the Americans should not give Turkey any cover to justify its invasion of Syrian territory.” “measures imposed by the Western countries on states that oppose their policies contradict international law and the UN’s Charter. The page of the West’s hegemony over the world has been turned.”

Abdollahian stated that “the summit held in Tehran yesterday stressed the need to combat terrorism until it is defeated.” Stressing “the importance of respecting Syria’s sovereignty and territorial integrity and resolving the crisis in political means.

He reiterated Iran’s condemnation of the Israeli aggressions, pointed out that it indicates the weakness the Zionist entity suffers, whose destiny will be to demise.

He added that he discussed with Mikdad “the reconstruction process of what was destroyed by terrorism in Syria and facilitating the return of the displaced and refugees”, stressed that the relations between the two countries are strategic and that Iran will continue supporting Syria in all domains”. 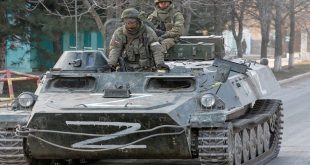