President al-Assad receives Oscar Rubin Fernandez, President of the Senate of the Republic of Paraguay 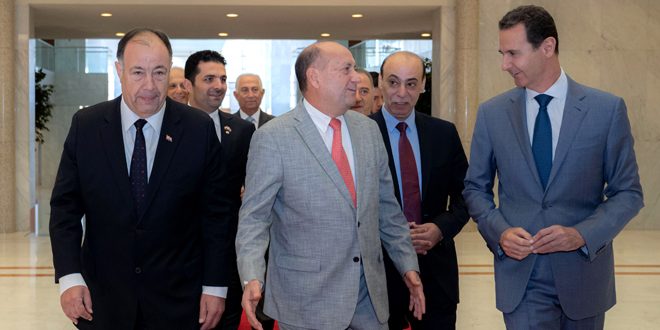 Damascus, SANA-President Bashar al-Assad stressed, upon receiving Oscar Robin Fernandez President of the Senate of the Republic of Paraguay and the accompanying delegation, that “the stable relations between states are based on the interests of peoples and the strengthening of common ties between them”.

President Assad called for intensifying communications between economic and commercial activities in Syria and Paraguay to serve the interest of the two peoples and the two friendly countries.

His Excellency stated that the Syrians who immigrated to Latin America centuries ago constitute a social and cultural bridge with this continent, considered that the success of the Syrian communities in integrating into the new societies confirms that the Syrians are among the most open peoples, as well as the confirms the openness of the peoples of Latin America who embraced these immigrants without exercising any form of racism, and they showed a deep understanding and support for the issues of the Arab region at all times.

2022-07-20
bushra
Share
Previous Mikdad: Any Turkish aggression on the Syrian territories would destabilize peace and security in the region
Next President al-Assad issues decrees on appointing new governors for eight Syrian provinces

Witnesses from Douma City: allegations of chemical attack are false