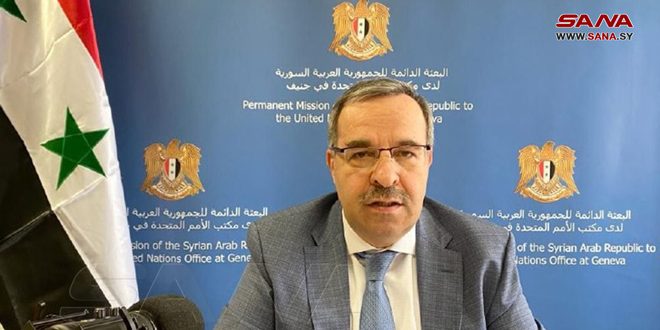 Geneva, SANA- Syria’s permanent representative to the United Nations and international organizations in Geneva, Ambassador Husam El-Din, stressed that the contribution of the Human Rights Council to settling the Ukrainian crisis requires abandoning ignorance of the systematic violations of human rights and atrocities committed against the residents of Donbass, and acknowledging that imposing illegal coercive measures on Russia and dispatching lethal weapons to Ukraine stresses Western countries’ endeavors to escalate the crisis.

In a speech before the Human Rights Council in Geneva, Ambassador Ala said that convening a special session of the Council on Ukraine, less than two months after a similar discussion session, and the recycling of the content of the resolution previously adopted, comes in the context of a systematic Western move to defame Russia and serve agendas that seek to escalate the situation in Ukraine and obstruct reaching a peaceful solution, which contradicts the role of the Council in promoting and protecting human rights based on universal and objective principles, away from politicization and double standards.

The ambassador stressed that the council session and the draft resolution before it, which ignores the facts and seek to selectively blame Russia, express an approach that has proven its failure in addressing human rights issues in a fair and non-discriminatory manner, calling on council members to reject this approach.

2022-05-12
Manar
Share
Previous Peskov: Russia will decisively respond to any country that tries to interfere in military operation in Ukraine
Next Mikdad discusses with al-Waer ways of delivering aid to those who deserve