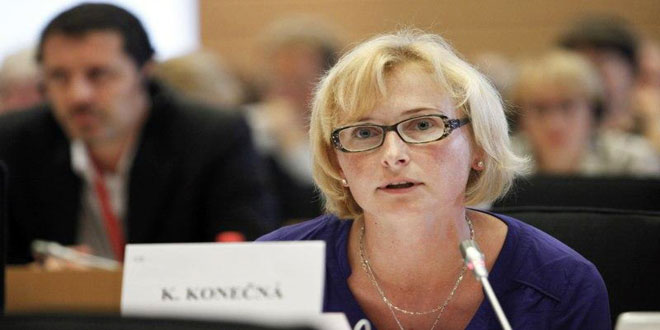 Prague, SANA- Head of the Czech Moravian Communist Party, member of the European Parliament for the Czech Republic, Kateřina Konečná, has described the continued imposition of unilateral Western coercive economic measures on Syria as ” absolute rudeness”.

After the terrorist war that has been waged on Syria, the country needs solidarity to rebuild it and achieve economic recovery, but the only effect left by the coercive Western measures lies in the deterioration of the living standards of the Syrian citizens and the slowing down of the reconstruction process, which is considered an “inhuman and immoral” behavior, Konečná said in a statement to SANA correspondent in Prague.

Konečná added that the West adopts a policy of double standards, as it talks about helping the neediest peoples, and at the same time it does everything it could to ensure that Syria or other countries could not restore their economic activity and growth.

Konečná added that Syria is a sovereign state, and therefore the unity and sovereignty of its territories and the choices of its people must be respected.