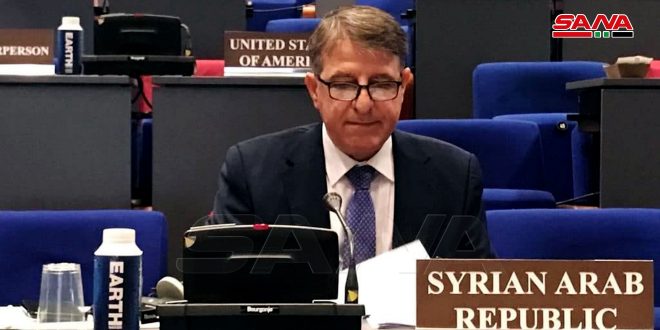 The Hague, SANA-Syria’s permanent representative to the Organization for the Prohibition of chemical Weapons (OPCW), Ambassador Milad Atiyah, said that countries which politicize the Syrian chemical file should be brought to Justice.

“The sates which politicize the Syrian chemical file, justify aggression, support terrorism, occupy Syrian territory and steal oil should be held accountable,” Atiyah added in comments on allegations by Washington and its allies against Syria during the works of the 26th  session of the Conference of the States Parties.

He went on to say that Syria has repeatedly stressed its firm stance in rejection and condemnation of the use of chemical weapons by anyone, at any time or place and under any circumstances and called for cooperation with it to confront terrorism and crimes of murder and destruction carried out by terrorists who carry out schemes of some well-known countries about scenarios on the use of chemical weapons to accuse the Syrian government of the act.

Atiyah criticized the task of the fact-finding mission which failed in more than one test.

“ The evidence on the failure of the fact-finding mission is clear to all the states parties and its bias and unprofessionalism has been proven in more than one report it issued, particularly the 2018 Douma incident report,” Atiyah added, calling on OPCW not to ignore this study as usual.