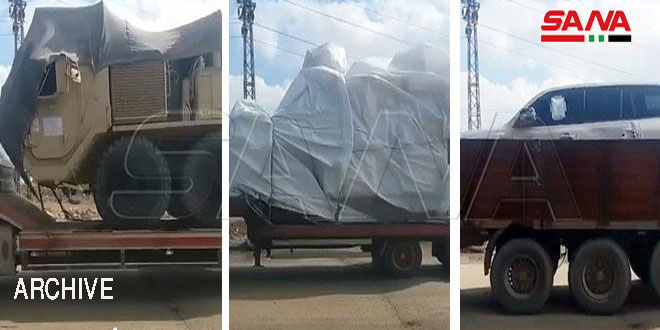 Hasaka, SANA-  A convoy consists of 270 vehicles affiliated to the US occupation forces left the US occupation base in Kharab al-Jeer military airport in Hasaka countryside and headed to northern Iraq via the illegitimate al-Waleed crossing in one of the largest evacuation operation that was carried out by US occupation in recent years.

Local sources told SANA reporter that a convoy consists of 150 refrigerator trucks and 120 covered flatbed carriers, carrying tanks of the US occupation left on Sunday from its military base at Kharab al-Jeer airport, accompanied by armored vehicles for the occupation forces and 4WD vehicles equipped with machine guns belonging to QSD militia to northern Iraq through the illegitimate al-Waleed crossing.

The US occupation forces brought out a convoy loaded with Syrian oil stolen from Syrian territory to northern Iraq, after the evacuation of a military convoy consists of 79 vehicles, mostly armored vehicles, from Kharab al-Jeer airport in al-Yaroubiyah countryside, heading towards Iraqi territory through the illegal al-Waleed crossing.