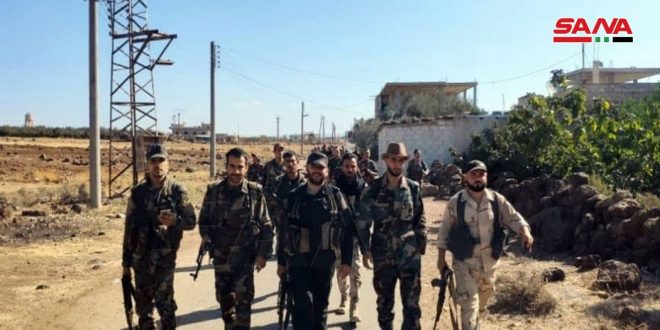 Daraa, SANA- Syrian Arab Army units carried out combing and searching operations in the villages of al-Maleiha al-Sharqiya and al-Maleiha al-Gharbiya, in which settlement operations have been made, in Daraa northeastern countryside, in implementation of the settlement agreement proposed by the State.

SANA’s reporter in Daraa said that the army units began combing and searching operations on Thursday morning in the villages of al-Maleiha al-Gharbiya and al-Maleiha al-Sharqiya and their surroundings, in preparation for the return of the service institutions to the villages.

Over the last weeks, army units have redeployed in many cities, towns and villages in the countryside of Daraa, in which settlement operations have been made and included large numbers of the wanted based on the agreement proposed by the Syrian state last August.