Army celebrates graduation of 16th round of high staff and command 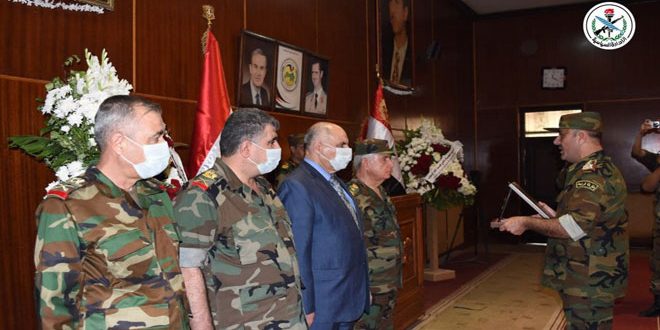 Damascus, SANA- Under the patronage of Commander-in-Chief of the Army and Armed forces, President Bashar al-Assad, a celebration was held on Thursday to graduate the 16th round of high command and staff at the Higher Military Academy.

The President was represented to the ceremony by Deputy Commander-of-Chief of Army, Minister of Defense, General Ali Abdullah Ayoub.

General Ayoub conveyed President al-Assad’s congratulations to the graduated officers, wishing them success and excellence in carrying out all the tasks and responsibilities assigned to them.

Defense Minister stressed that the most difficult and hard chapters in this systematic terrorist war have been overcome, and that the certainty is absolute that the Syrian State, with the wisdom of its leader, the sacrifices of its people, the heroism of its army and the support of its partners and friends is today more powerful, present and effective.