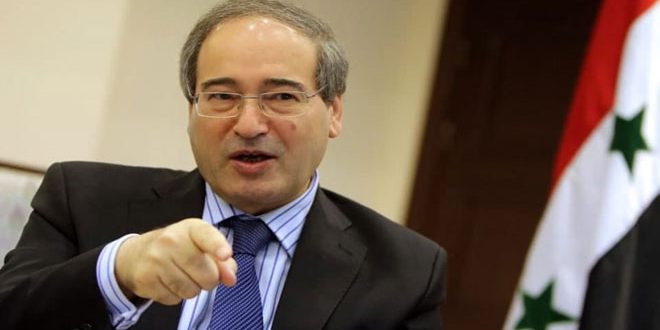 Damascus, SANA-Foreign and Expatriates Minister, Faysal Mikdad, affirmed that change of the international political atmosphere towards the Syrian issue in general and the retreat of the hostile stance to Syria in the official discourse of most of the UN member states were clear and evident during activities of the General Assembly meetings.

“The change has reflected the achievements of the Syrian Arab Army, in cooperation with allies and friends, on the ground in the war against terrorism and the return of security and stability to all the country,” Mikdad told SANA in a statement.

In response to a question about the importance of meetings held by the Syrian delegation with Arab and foreign ministers, Mikdad said that Syria has always been open to any honest and impartial political initiatives or efforts to help it get out of the crisis despite the obstacles set by countries that have no interest in the continuation of these efforts towards achieving stability in Syria.

He added that despite the repercussions and restrictions related to COVID 19, “we have held several bilateral meetings with many foreign ministers of Western and Arab countries and a number of UN officials, we can say that these unprecedented meetings, synchronized with the active presence of Syria during the public meetings, are an important indicator on the international arenas, which has come to realize that Syria, with its national and civilized identity, made it clear that despite its openness to the return of normal relations, it will not submit to pressures nor accept any political conditions.”.

Mikdad went to say that with regard to Syria, the most important thing during meetings of the General Assembly was the change in the international political atmosphere towards the Syrian issue in general, and of course some well-known countries still practice economic terrorism and impose unilateral measures, but the retreat of the hostile stance to Syria in the official discourse of most member states was crystal clear.

About the importance of the Syrian delegation meetings in New York with some Arab and foreign ministers, including Egypt, Mikdad considered that the meetings were undoubtedly important, and Syria welcomes any initiative to restore normal and warm relations with the brotherly Arab countries, and we look forward to dealing with Arab countries in accordance with the principles of mutual respect and interests.

“The atmosphere has become more positive, and we will continue our battle against terrorism until all Syrian lands would be purified from terrorism and establish the State control, restore security and stability to all parts of the country, and this is a national and constitutional duty and nonnegotiable right,” Mikdad added.