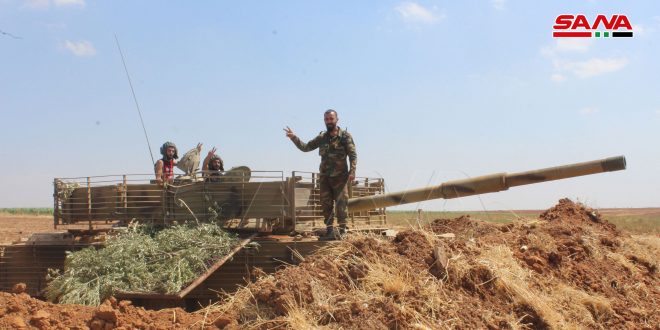 Daraa, SANA- Operations of settling status of a number of gunmen and handing weapons over in al-Yadoudeh town, northwest of Daraa city continued as units of the Syrian Arab Army continued to redeploy in the farms surrounding the villages and towns of al-Yadoudeh, Tafas and al-Mzairib in the northwestern countryside.

This comes within the framework of implementing the settlement agreement proposed by the State.

SANA reporter in Daraa said that army units redeployed in points inside the farms of the villages and towns of al-Yadoudeh, Tafas and al-Mzairib.

The reporter added that the Army engineering personnel continue to comb the agricultural lands adjacent to al-Yadoudeh towards Tafas and al-Mzairib to remove the explosives, weapons and ammunition to protect the civilians, adding that a number of rifles and amount of ammunition were discovered.

In the same context, operations of settling the status of a number of gunmen, the wanted and the military deserters and handing over weapons continued within the settlement center that the state has opened in al-Yadoudeh village to the west of Daraa city.

Dozens of gunmen have their files settled on Monday and weapons were handed over within the center in implementation of the settlement agreement proposed by the State to consolidate the security and stability in Daraa al-Balad neighborhood and some areas in the countryside of the province, that led to the return of thousands of citizens last Thursday to their homes in the neighborhood after the army has redeployed in the area and removed the earthen berms and opened the roads.