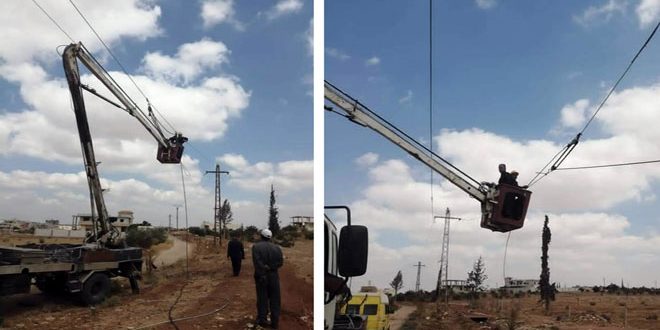 Daraa, SANA- Workshops affiliated to the General Electricity Company in Daraa province continued work to restore electricity to Daraa al-Balad area, al-Sad and the camps after units of the Syrian Arab Army have redeployed in the area and restored security and stability to it based on the settlement agreement proposed by the State.

Director of the Company Eng. Hani al-Masalmeh told SANA in a statement that the electricity network has been damaged and five transformation center went out of service and they need to be repaired.

Eng. al-Masalmeh called upon the citizens to cooperate with the Electricity Company in repairing the damage and to prevent any infringement and violations against the electricity which would delay the return of electricity.

He pointed out that electricity will return gradually to the area starting from next Thursday.