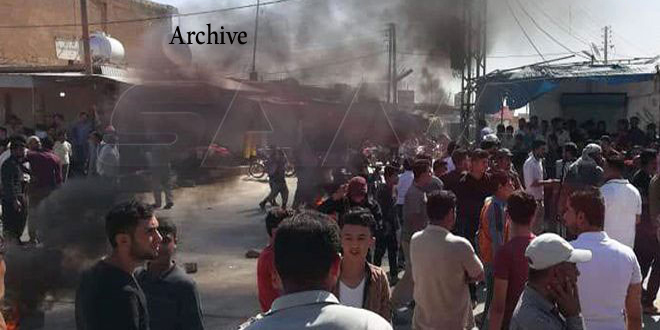 Deir- Ezzor, SANA- the popular resistance factions targeted one of US –backed QSD militia sites  in the village of Abu Hardoub in the countryside of Deir-Ezzor .

Civil sources told SANA reporter that members of the popular resistance factions targeted, with a hand grenade one QSD militia sites in at al-Ziraa building in the village of Abu Hardoub in  al-Mayadin area in the southeastern countryside of Deir Ezzor, causing material damage to the site, but there was no information about injuries as the militia militants encircled the area.

Meanwhile, an armed group of the US-backed QSD militia stormed into al-Shuhail city in the eastern countryside of Deir –Ezzor , kidnapping four civilians and looting their private properties .

Local sources told SANA reporter that armed groups of the militia cordoned al-Khayasa neighborhood in the city of al-Shuhail in the eastern countryside of Deir Ezzor and broke into  a number of its houses and kidnapped 4 civilians, taking them to one of its nearby dens.

2021-08-31
bushra
Share
Previous US occupation brings in a convoy loaded with logistic supplies to its bases in Hasaka countryside
Next On its 4th day, large turnout to Family market at old fairgrounds in Damascus