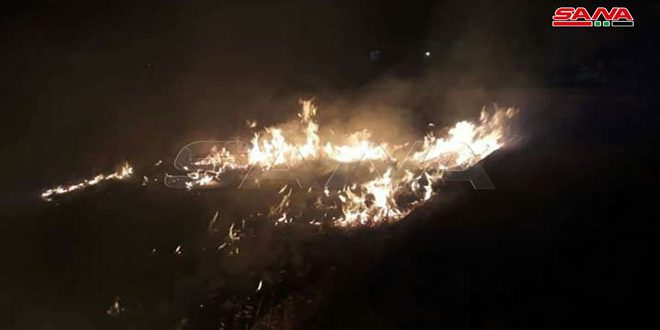 Quneitra, SANA- The Israeli occupation forces have committed an arson in the woodlands of Bir Ajam in Quneitra southwestern countryside, and the firefighting brigade, in cooperation with the Forestry Department at the Agriculture Directorate in the province, has managed to put it out.

SANA’s reporter in Quneitra stated that the fire broke out after midnight as the Israeli occupation forces launched flare bombs that set fire to the woodlands adjacent to the disengagement zone near the barbed wire. Mohamed al-Samiyah, Head of the Fire brigade at Quneitra Fire Regiment, said that the fire engulfed an area estimated at 8 dunums of forestlands located to the east of the barbed wire in the town.

Al-Samiyah added that that the speedy response by the firefighters and the forestry department has contributed to putting out the fire and limiting its spread, pointing out that the occupation forces deliberately set fires along the ceasefire line during such times, which damages the environment and forest trees.