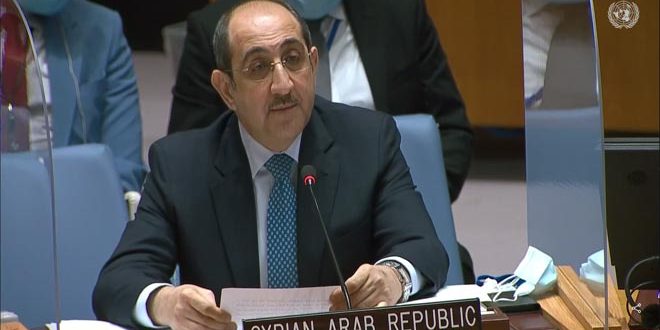 Geneva, SANA-Syria’s permanent representative to the UN, Bassam Sabbagh, said that Syria exerts its efforts to facilitate the return of refugees to their homeland as its cooperation with friendly countries, the UN and international organizations has given fruits for the return of a large number of them.

Sabbagh added at a session of UN Security council about the situation in Syria that the US and its allies hinder initiatives related to the return of the Syrian refugees and distort facts through claiming that the appropriate conditions for their return are not available.

He went on to say that to improve the humanitarian situation in Syria, this requires the removing of western, coercive measures that target the Syrians’ livelihood.

Sabbagh said that  those measures prevent Syrians from having food, medicine, fuel and other basic needs and they directly affect the level, quality and efficiency of humanitarian and relief operations conducted by the UN and other international organizations in Syria.

He added that the US occupation of areas in the  northeastern part of  Syria and the Turkish regime occupation of regions in north and northwest Syria, and stealing the resources  and national capabilities of the Syrian people aggravate the suffering of the Syrians which require an end to the US and Turkish occupations of Syrian lands and the lifting of unjust Western measures.

Sabbagh stressed that Syria continues to follow up on the efforts of UN Special Envoy for Syria, Geir Pedersen, and renews its commitment to a political process led by Syria and its positive and constructive participation to facilitate the holding of the sixth round of the Committee of Discussing the Constitution.

He referred to the need for fully respecting the committee’s references and rules of its procedures and not to interfere in its work or attempt to impose illogical and unrealistic conclusions or timetables.

As for Daraa, Sabbagh said that Syria stresses its categorical rejection of the baseless lies included in the statements of some countries about the situation in Daraa.

“The terrorists in Daraa have assassinated 250 members of army and police, 18 municipality chiefs and more than 115 citizens, while the wounded have reached to nearly 500 ones from civilians and army members,” Sabbagh said.

He added that Daraa al-Balad has witnessed an escalation in hostilities by armed terrorist groups that breached, by orders of their operators, the truce agreements.

2021-08-24
m.eyon
Share
Previous With participation of Syria, Tokyo Paralympic Games kick off
Next Scientific, sports and social activities for Syrian students in Belarus