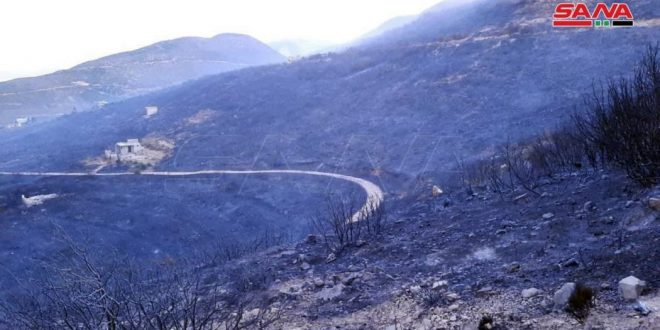 Hama, SANA-Firefighting teams in Hama province have completely put out the fires that erupted in the mountainous forestry at Kfar Laha-Ayn al-Khanzir site in Misyaf countryside as cooling operations are underway.

Earlier, fires erupted once again in the mountainous forests in Kafr Laha, Ayn al-Khanzer area , extending to Ayn al-Dora, southwest of Masyaf city in Hama countryside as the firefighting teams worked to extinguish them in the early morning hours and conduct cooling operations.

Director of agriculture Department in Hama, Abdel Moneim Sabbagh, said in a statement to SANA reporter that the fires erupted again in the aforementioned area as a result of strong winds and the high temperature.

From operations of putting out fires

2021-08-06
hybah
Share
Previous Al-Khomassya company sale reached up more than SYP 2 billion, continues to rehabilitate and maintain its machines
Next US occupation removes 40 Daesh terrorists from prisons of QSD to its base in al-Shaddadi , Hasaka