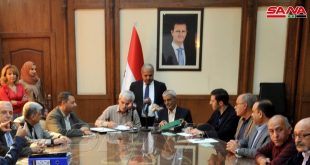 Provinces, SANA – The General Establishment of Electricity in Quneitra announced that electric power has been restored to all towns and villages following a power outage caused by a terrorist attack which targeted the main high voltage power line in the surrounding of al-Khazrajia area that supplies the entire province.

A source at the Establishment told SANA reporter that repairs were carried out by direct linking with the power line which feeds Sa’sa’a town.

The source added that the power rationing and supplying hours will be two hours for two hours until the maintenance teams are able to enter the area and repair the damage.

On a relevant note, a source at the Electricity Ministry in Damascus stressed the readiness of its entire staff to address any emergency situations that may affect the power grid due to the current weather conditions.

The source noted that repair and maintenance teams will be ready around the clock in all provinces, adding that all vehicles and necessary equipment are available to facilitate their work.

In this regard, Quneitra and Sweida provinces have taken all necessary procedures in preparation for the upcoming snowstorm expected to reach internal areas during the night.

Syria is affected by a low-pressure area of polar origin accompanied by cold and moist fronts. The Meteorology Department expected snow to fall on areas that are 800 meters above sea level during Tuesday night.