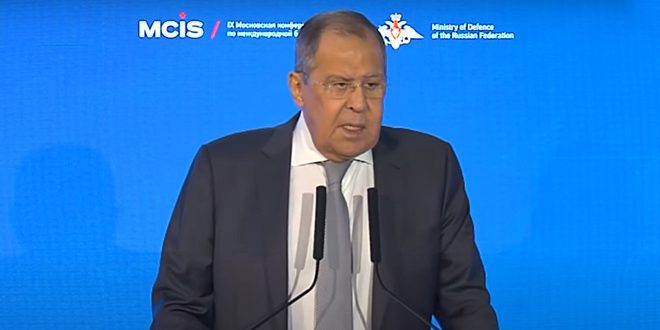 Moscow, SANA- Russian Foreign Minister Sergey Lavrov on Thursday renewed that Russia will continue to provide support to Syria in combating terrorism and reaching a political solution to crisis in it.

In a speech in IX Moscow Conference on International Security, Lavrov said that “We offered support to Syria in its war against terrorism and we will continue to support it until eliminating it completely and reaching a political solution to the crisis in it.

the West is undermining the work of the Organization for the Prohibition of Chemical Weapons (OPCW) which was clear in its dealing with the chemical file in Syria.

Syria strongly condemned decision which was passed by the US and its Western allies at the 25th session of the Conference of States-Parties in the Organization for the Prohibition of Chemical Weapons against Syria last April, stressing that its hostile approach constitutes a dangerous development in the organization’ track and contradicts its charter.

The West obstructs the fight against terrorism in Syria, Patrushev says

Patrushev said in a speech today during the 9th Moscow Conference on International Security that Russia has fought with the Syrian people to defeat terrorism in the interest of not only Syria but the whole world. “It is unfortunate that some Western countries that seek to impose their hegemony on the region did not consider it necessary to work with us against this evil, and even made great efforts to obstruct the fight against it,” Patrushev said.

He indicated that Russia will continue to provide support to Syria until the complete elimination of terrorism, and will continue to support the efforts of the return of the displaced Syrians to their country and the reconstruction at all levels.

Patrushev underlined the need to build international relations on the basis of cooperation and respect for the sovereignty and interests of states, noting that Russian foreign policy adopts a clear track in order to reach a multipolar world.

Lavrov support Syria 2021-06-24
hala
Share
Previous China: Any humanitarian aid for Syria must pass through its government
Next Terrorist organizations relied on drugs to finance their crimes, Ambassador Hadad affirms