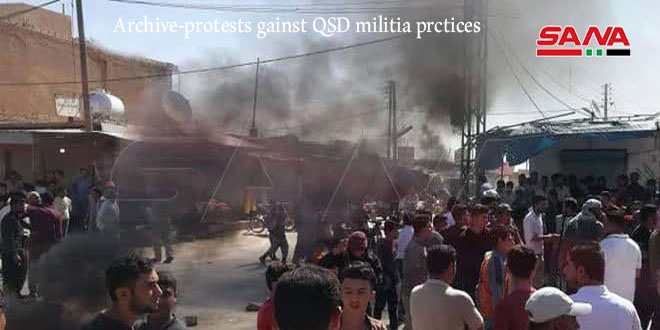 Hasaka, SANA- A woman was martyred and a number of civilians were injured by fire of gunmen of the US occupation-backed QSD militia as they have targeted a public transportation vehicle at the entrance of Tal Hamis township, south of Qamishli city, Hasaka northeastern countryside.

Local sources told SANA that gunmen of the QSD militia positioned at the so-called (al-Shahin checkpoint) at the entrance of Tal Hamis area, opened fire at a public transportation vehicle coming from the direction of Qamishli city, causing the martyrdom of a woman and injury of others.

The sources added that the gunmen have targeted the vehicle, during their attempt to kidnap one of the passengers.

The last weeks have witnessed escalating raid operations launched by the QSD militia in the areas which they occupy in the Syrian al-Jazeera region, in addition to abducting tens of locals and hundreds of young men in the countryside of Deir Ezzor, Raqqa and Hasaka, and taking them to the militia’s camps to force them fight among its ranks.