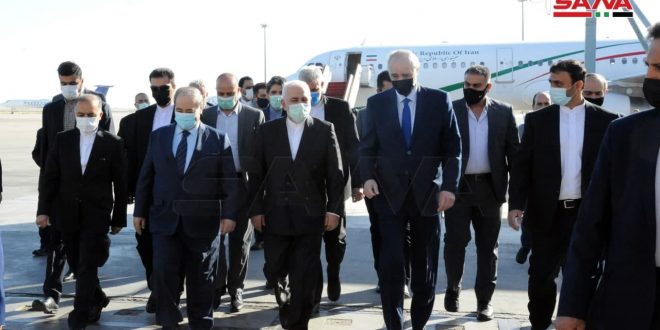 Damascus, SANA- Iranian Foreign Minister Mohammad Javad Zarif arrived in Damascus on Wednesday morning to hold talks with senior state officials on the latest developments of the situations in the region and the bilateral relations.

Upon arrival at Damascus International Airport, Zarif was received by Foreign and Expatriates Minister Dr. Fayssal Mikdad and a number of Foreign Ministry officials.

In a statement to journalist after his arrival, the Iranian Foreign Minister expressed happiness to be in Syria again and to meet the Syrian brothers, indicating that the current circumstances are very special, and it was planned to pay a visit to Syria on the eve of the elections there to hold talks with Syrian friends about this important event. “Unfortunately, the criminal acts of the Zionist entity, which have escalated since the International al-Quds Day, and the unprecedented events that took place in al-Aqsa Mosque and the occupied territories and the bombing of Gaza, have created very deteriorating conditions in the region, and Syria, as one of the leading countries in the axis of resistance, has a very important role in this field,” Zarif said.

He added that the talks would touch on the support provided by the Islamic Republic of Iran for the Syrian Government and people, whether on the track of reconstruction or on the track of combating terrorism, in addition to the current situation in occupied Palestine.

For his part, Mikdad emphasized that this visit is important and comes at a crucial time that we are going through in both countries and the region, where the aggressive Western, American and Israeli policies are escalating … and the Palestinian people are now suffering as a result of the bloody practices of the Israeli entity.” Minister Mikdad indicated that the situation is deteriorating in the framework of targeting this region by Western powers, adding ” Targeting Syria and the Islamic Republic of Iran has been due to the stances of these two countries on the Palestinian issue and the support they provide to the Palestinian people’s struggle for liberation and building an independent state.”

Mikdad added that the coming hours are full of many meetings, through which we hope to discuss the recent developments in both countries, and on the other hand, there are issues and developments that are not a few, which we will work to deal with in detail in order to continue the standing coordination between our two countries.

bilateral relations Zarif arrives in Damascus to hold talks with senior state officials on regional developments 2021-05-12
ruaa-jazaeri
Share
Previous Scores of Palestinians martyred, wounded in Gaza and West Bank as Israeli occupation escalates its attacks on the besieged Strip
Next Sabbagh: Syria paid precious price for its adherence to Palestinian cause