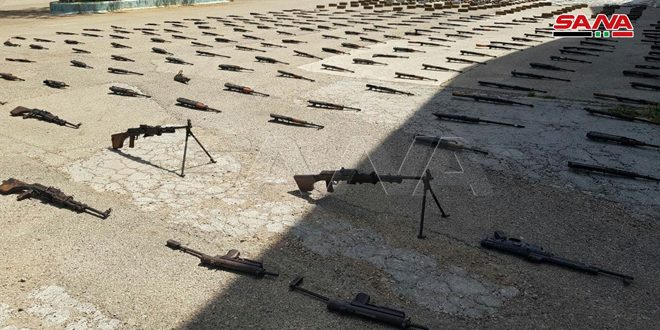 Homs, SANA- Competent authorities found amounts of weapons and ammunition left behind by terrorists in the northern countryside.

SANA reporter in Homs Said Monday that during their combing and clearing campaigns of the northern countryside of the remnants of the terrorist organizations, the competent authorities uncovered amounts of weapons and ammunition, some are western-made ones. During completing their combing operations of the liberated villages, the competent authorities, in cooperation with units of the Syrian Arab Army, found, over the past months, several caches and warehouses of weapons and ammunition left behind by terrorist organizations.

ammunition authorities Homs weapons 2021-05-03
hala
Share
Previous A civilian martyred, two injured in Turkish occupation mercenaries attack in Aleppo northern countryside
Next Head of the Supreme Constitutional Court: Three candidacy applications to run for president are accepted, the rest are rejected for not meeting the constitutional and legal conditions