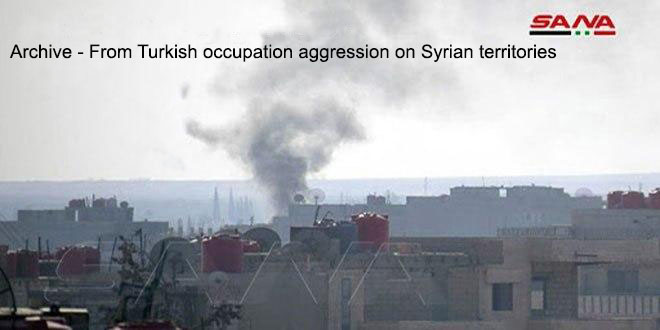 Aleppo, SANA-Turkish occupation forces and their mercenaries of terrorist organizations renewed on Saturday their attacks with rocket and artillery shells on a number of villages in northern Aleppo countryside.

Local sources told SANA that several rocket and artillery shells, launched by Turkish occupation forces and their mercenaries, fell on the villages of Daghlbash to west of the city of al-Bab, Ayn Daqnah , and the vicinity of Meng Military Airport, Mara’anaz and Okaiba, north of Aleppo city .

The sources indicated that the attacks caused material damage to private and public properties.

On Thursday, Turkish occupation forces and terrorists attacked residential areas in the villages of Ain Dagna and Baylounieh in the northern countryside of Aleppo.

Meanwhile, a terrorist affiliated to Turkish occupation was shot to death in Ras al-Ayn in Hasaka countryside.

Local sources told SANA that one of Turkish occupation mercenaries linked to the so-called “Hamza Brigade”, was shot to death in al-Mahatta neighborhood near the silos of Ras al-Ayn city in the northwestern countryside of Hasaka.