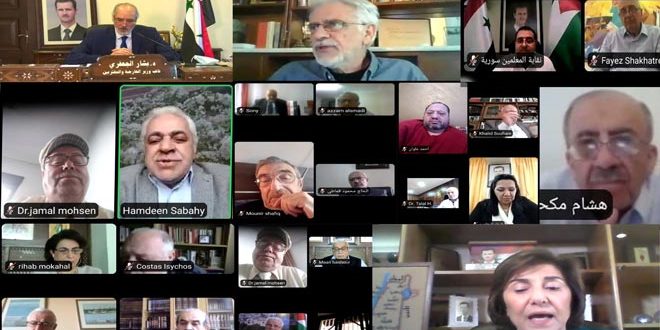 Beirut, SANA- The International Arab Forum, organized by Arab National Conference and the Arab International Center for communication and solidarity in Beirut, called for launching a popular campaign to remove unilateral coercive measures imposed by the European Union and the United States on Syria.

In a speech during the Forum, Head of the International Arab Center for Communication and Solidarity, Maan Bashour, said that the so- called “Caesar Act” imposed on Syria constitutes a violation of all legislations and laws, stressing the rejection of this unjust act and the importance of launching a popular campaign to lift it.

In turn, Special Advisor at the Republic Presidency, Buthaina Shaaban, said that there is no justification for any state or party to remain silent towards what is practiced against Palestinians, Syrians, Yemenis and Iraqis, asserting that the unilateral coercive measures imposed by US along with its blockade on millions of innocent civilians in Syria does not acquire any legal status or legitimacy but it is injustice by the dominant military force used to subjugate people.

Shaaban added that the unilateral coercive measures which are known as “Caesar Act”and other measures imposed on Syria and Yemen amounts to a crime of collective punishment against the Syrian people.

She noted that US, as an occupying force in northeast Syria, loots the Syrian oil and wheat in broad daylight.