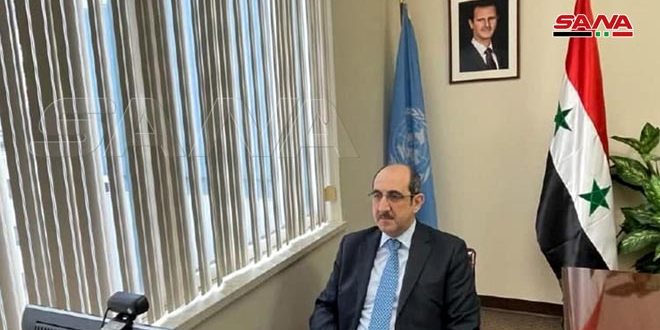 New York, SANA-Syria has affirmed that the occupied Golan is part and parcel of its territory and it will return it with all means guaranteed by international law as an eternal imprescriptible right.

Syria, in this context, called on UN Security Council to move and implement  its Resolution No. 497 of 1981 with the Israeli full withdrawal from Golan to the line of June 4th 1967.

Syria’s permanent representative to the UN, Bassam Sabbagh, said in a statement submitted  to the presidency of Security Council on Thursday’s session about the situation in the Middle East, that the Israeli continued occupation of the Palestinian lands, the Syrian Golan and Shebaa farms in southern Lebanon for more than five decades “reminds us once again of the failure of the Security Council to assume its responsibilities in maintaining international peace and security.”

Sabbagh clarified that UN Security council failure to assume its responsibilities in light of the US support for the Israeli occupation entity encourages the occupation to continue its attacks on Syrian territories in violation of Security council resolution No. 350 for 1974 relevant to the Agreement on disengagement.

He said that the Israeli occupation, since August 27th,2014, has closed Quneitra crossing which represents the artery for the Syrian citizens in Golan to contact with their homeland, calling on the international community to exert pressure on “Israel” as an occupying force to open this crossing immediately.

Sabbagh recalled a resolution lately adopted by Human Rights’ Council in which it condemned Israeli occupation violations of the rights of Syrian citizens in Golan, and the policies of annexation and colonial settlement which contradict resolution No.497 for 1981.

He expressed Syria’s regret that reports of the Secretariat ignore the dangerous situation and the Israeli systematized practices against the Syrian citizens who live under occupation, renewing Syria’s demand of UN envoy to the Middle East Tor Wennesland to adhere to the custody he is charged with and to give Golan the necessary interest.

Sabbagh stressed Syria’s support to the Palestinian people’s right to self-determination and to establish their independent state with Jerusalem as its capital.

2021-04-22
m.eyon
Share
Previous As part of efforts to turn it into a national museum, restoration works at old Saraya building in Jableh kick off
Next Foreign Ministry calls on UN and Security Council to condemn Israeli aggression on surrounding of Damascus