As part of efforts to turn it into a national museum, restoration works at old Saraya building in Jableh kick off 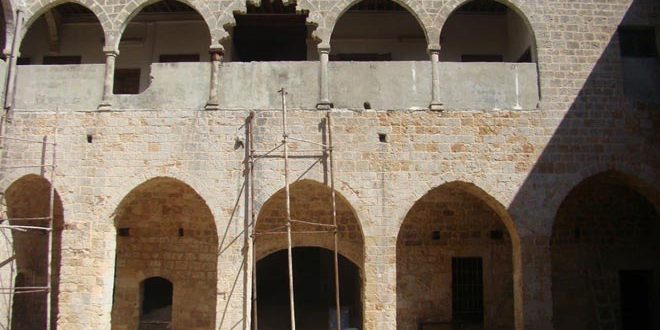 Lattakia, SANA- Jableh Antiquities’ Department has started the work of turning old Jableh Prison building (al-Saraya) into a museum at the beginning of April to introduce Dr. Masoud Badawi, head of Jableh Antiquities Department, said in a statement to SANA reporter that ‘’the Department started the first phase of restoring the ground floor of old “al-Saraya” building under the supervision of engineers from the department, where the work began with documenting the building and then removing the breaches on the main building block and cleaning the walls, according to the standards of restoration in force at the General Directorate of Antiquities and Museums.’’

Badawi added that when the restoration works are completed, the Museum will display the artifacts discovered in the archaeological excavations that were carried out in various sites in Jableh area of Tal al-Tweini, Tal Sokas, Tal Siano, Tal Iris, the cemeteries of al-Jibibat, al-Azza, al-Fayd, Bani Qahtan Castle, al-Minaqah Castle, Nepal Summit, Jableh Archaeological Theater, and the Roman Bath, in addition to separate sites where the archaeological excavations were carried out.

Badawi went on to say that the museum will be as a civilizational and cultural center, which introduces visitors to the ancient history of Jableh region, which extends from the 6th millennium BC to the 19th century AD.

Ancient al-Saraya building in Jableh city is considered as one of the most important historical and archaeological buildings, it is located in the middle of the northeastern side of the old city and is about 100 meters south of the ancient Roman theater of Jableh. The building dates back to the Mamluk period and the time of the Ottoman occupation.