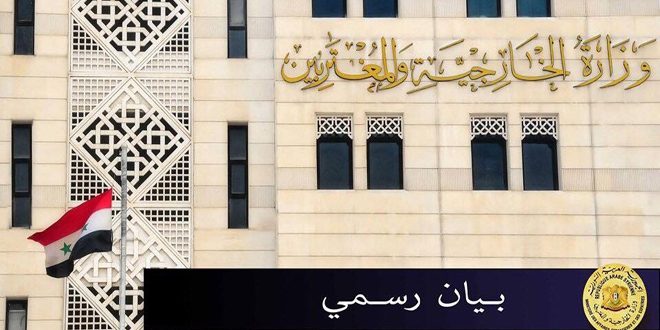 Damascus, SANA-Syria has affirmed that the Israeli aggression Thursday dawn on its territories is a blatant violation of the Agreement on disengagement, calling on the UN and Security council to condemn it and the hostile repeated acts against sovereignty of the Syrian Arab Republic.

“Israeli occupation forces, at 1:38 a.m. on Thursday April 22nd, 2021, launched a new missile aggression from the direction of the occupied Syrian Golan on the lands of Syria which targeted some regions in the surroundings of Damascus in a blatant violation of the Agreement on Disengagement of 1974,” Foreign and Expatriates Ministry said in a statement.

The statement added that Syria calls on the UN, particularly Security Council to condemn the Israeli cowardly attack and the hostile repeated acts against sovereignty of Syria perpetrated by the three occupiers of ” Israel, US and Turkey” in a systematized manner. “

As a founding member at the UN, Syria still demands UN General Secretariat and Security Council to assume their responsibilities in the framework UN Charter, most importantly, maintaining international peace and Security and obliging Israel to respect the resolution relevant to the Agreement on Disinterment of 1974 and bring all sides that support terrorism and launch aggressions on the Syrian sovereignty into justice in line with resolutions 242, 338, 350 and 497.