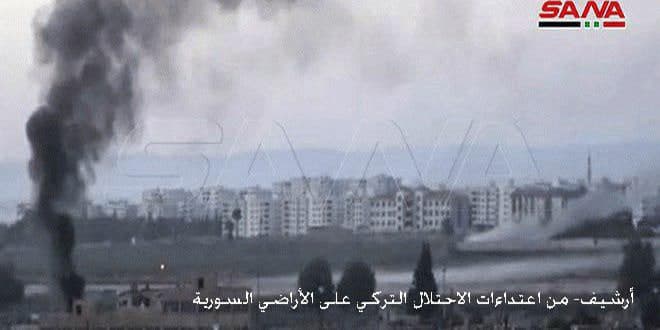 Raqqa, SANA- A number of civilians were injured as Turkish occupation forces and their mercenaries of terrorist organizations launched artillery attack on the surroundings of Ain Issa town in Raqqa northern countryside.

Local sources told SANA that the Turkish occupation forces and their terrorist mercenaries launched, from the areas they are positioning in in Raqqa far northern countryside near the Turkish borders, artillery attack against the residential gatherings in Saida village and the vicinity of Ain Issa town and the roads leading to them, causing the injury of a number of civilians and damage to the houses and properties.

Since the beginning its aggression in October 2019 and its occupation of a number of villages, towns and cities in Raqqa and Hasaka northern countryside, the Turkish occupation forces and their mercenaries of terrorist organizations have taken those areas a springboard for launching their continued attacks against the civilians and displaced thousands of them and looted their properties.