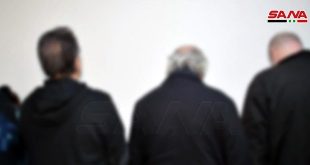 Damascus, SANA – The Central Bank of Syria (CBS) decided to allow exchange companies to keep 40% of the amount of incoming money orders in foreign currency for five business day.

This came during an intervention session on Tuesday attended by representatives of exchange companies, with the participants saying that the recent slump in the foreign currency market is caused by speculation attempts that sought to make profits at citizens’ expense, which is confirmed by the drop in the exchange rates that happened when the CBS announced an intervention session.

They also said that another element that affected the market is the return of several industrial facilities to work and the ensuing growing demand on imported raw materials, which created a disparity in supply and demand.

In a statement to SANA, CBS Governor Adib Mayyaleh said that the bank will continue carrying out intervention sessions on weekly basis from the start of 2015 to ensure stability in the market, noting that the decision to allow companies to keep 40% of the money orders seeks to give them more flexibility in meeting the demands of the market.

He also said that exchange companies can apply for import financing orders on daily basis, permitting easier funding for imports.