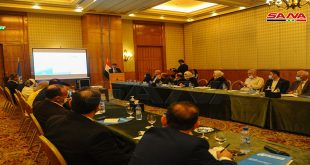 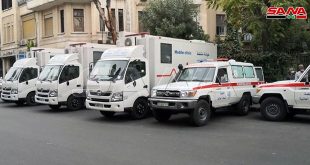 Damascus, SANA – The World Health Organization (WHO) said remarkable progress has been witnessed recently with regard to the delivery of medical assistance in the Syrian provinces.

WHO Representative Elizabeth Hoff noted in a statement to SANA that this recent progress has led to improving the health situation and reducing morbidity and mortality rates in the country.

Hoff confirmed that the Organization has already delivered over 210 shipments of medical supplies to Syrian provinces, including hardest hit and difficult-to-reach areas.

She noted that thanks to constant communication with the official parties in Syria, including Foreign, Health and Higher Education ministries, the improvement in aid delivery has been made possible, highlighting the importance of keeping this communication.

The crisis in Syria, Hoff stressed, is at the heart of the WHO’s priorities, pointing out that the Organization has been working with transparency and accuracy as far as determining the mostly affected areas and segments is concerned.

In a relevant context, the WHO denied news circulated by Reuters news agency which claimed that the Syrian government has been blocking access to medical surgical supplies into areas under the control of the “armed opposition.”

On the contrary, a WHO statement said, there is a positive cooperation between the Organization and the various Syrian government bodies to secure fair and equal distribution of medical supplies across Syria.

Furthermore, the statement added that what was attributed to Hoff in her recent interview with the news agency on her referring to Syrian state figures or the government was only additions that were not at all mentioned.