On Tree Day, a celebration in Hayaleen Forest site in Hama countryside 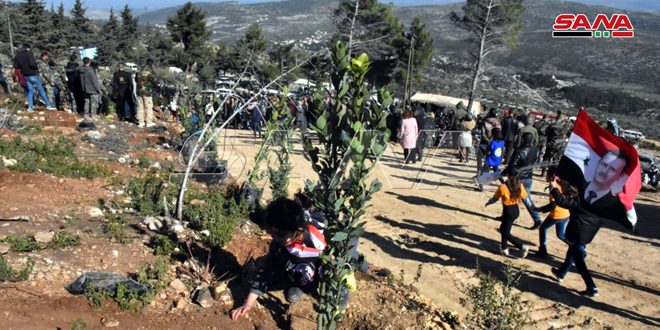 Hama, SANA- Celebrating the 69th Tree Festival, the Ministry of Agriculture and Agrarian Reform launched an afforestation campaign at Hayalin site in Misyaf in Hama countryside, in a central ceremony under the title “Our Land is Gold” that will continue until the end of next March, with the aim of expanding the green areas and replanting the forests affected by the fires. Agriculture Minister, Hassan Qatana, said in a statement to SANA reporter that the celebration on Tree Day reflects the belonging to land and home and it is a national day and a motivation  for every citizen to make the tree as part of their lives through cultivating and protecting it, referring to the importance of expansion in planting trees.

In turn, Hama Govrner, Mohammad Tareq Kreishati, said that “we celebrate the Tree Day to prove to the world that the Syrian people are invincible and unbreakable, but rather they plant in one hand and fight terrorism in the other to keep Syria green.”

Director of Hama Agriculture, Abdel Moneim Al-Sabbagh, also stated that the campaign includes planting 45 hectares of the total site which is 100 hectares and it will be planted with pine, laurel, oaks, sumac and butum.