A bicycle rally from Deir Ezzor to al-Qardaha kicks off 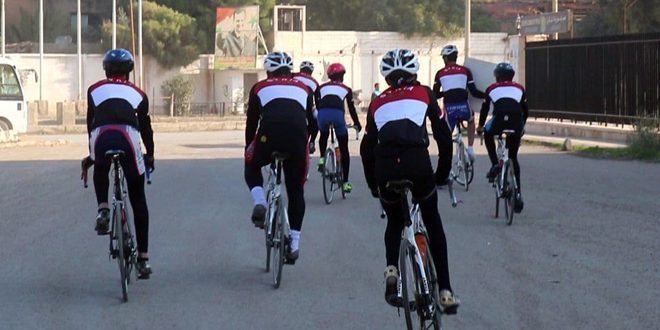 Deir Ezzor, SANA- A bicycle rally on Monday was launched from Deir Ezzor to the tomb of Late President Hafez al-Assad in al-Qardaha in Lattakia.

Head of the Executive Committee of the Sport Union in Deir Ezzor, Hussein al-Mazyad, stated that the rally is an initiative of loyalty to the homeland and its leader among Deir Ezzor athletes, whose aim is to convey a message that sport which was stopped in the province due to terrorism, has returned to its previous activity in preparation for restoring its position on the Syrian sport map.

Mazyad pointed out that eight bikers from Deir Ezzor province are participating in the rally and a number of bikers from Homs, Tartous and Lattakia will join the rally.

In turn, the head of the Bicycles Technical Committee in Deir Ezzor, Abdul Rahman al-Shaher, said that the journey which started on Monday from Deir Ezzor towards Palmyra will continue its progress tomorrow from Palmyra to Homs and then from Homs to Tartous and from there to Lattakia, and it will reach the tomb of Late President Hafez Al-Assad in Qardaha City.

A number of athletes participating in the rally indicated that they would tour several provinces on their bicycles to finally reach Qardaha city to confirm their standing by their homeland, expressing hope that the sport in their province will return to its normal status.