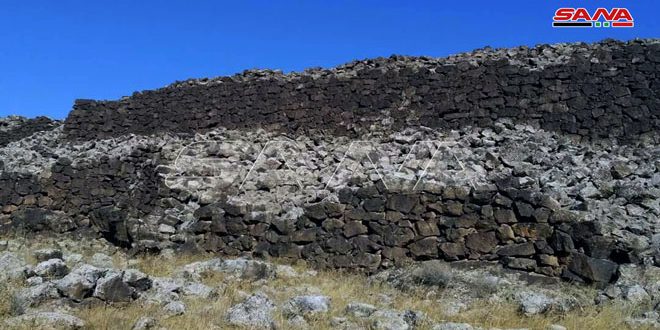 Sweida, SANA- Lubwa As-Suwaimra in Sweida governorate is unique from the rest of the ancient Bronze age sites, with its fortifications and the grandeur of its buildings, which are indicated by the foundations remaining to this day from their demolished dwellings.

As-Suwaimra , according to the researcher in the area’s antiquities and the former head of the Antiquities Department in Sweida, Hassan Hatoum, affirms that it was an ancient city established in the northeastern corner of the Lajat region in the middle of a rocky surface formed from the volcanic torrent and the road to it is difficult even for pedestrians and is about 2.5 km from the beginning of the road on the eastern side.

He indicated that As-Suwaimra was classified long ago, especially on the maps of the French occupation army from the year 1920, as a Roman ruin, but when specialists visited it in 1980, they realized its importance and it became clear through its studies that it dates back to the ancient Bronze Age 3100-2100 BC. The ancient city of As-Suwaimra was constructed, as Hatoum mentiones, on a flat volcanic hill surrounded by a flat spot and resembling a hill the shape of the skin of a bull, and its circumference is round. The area of the houses that were inhabited is about 3.5 hectares surrounded by a wall. The houses were built inside except for a number of them outside it from the northeastern side and in general the area of the site is About 5 hectares.