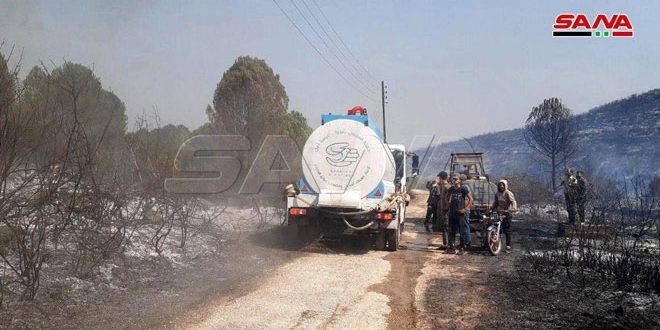 Tartous, SANA- Firefighting team affiliated to Tartous Agricultural Department, in cooperation with the Civil Defense and the locals, extinguished a number of fires erupted in Mashta al-Helou area in the countryside of the province, while efforts are still exerted to extinguish other fires erupted in different areas.

Naseif added that the firefighters are still tackling some fires in the Mashata , particularly in Kafroun Badra, Karkar Spring and Kafer Snaif.

He indicated that the fires destroyed wide areas of the agricultural lands and forests, stressing that they gave top priority for extinguishing fires.

Naseif indicated that the firefighting team are dealing with some hotbeds of fires in Daher Sarhin, Daher al-Maraneh and Nahel al-Annazeh in Banyas area.

In Sweida and Daraa, the Firefighting teams of Sweida and Daraa Agricultural Departments participated in extinguishing the fires erupted in the Countryside of Tartous and Lattakia provinces.

Commander of Firefighting Brigade in Sweida

Nayeh al-Shaar told SANA reporter in a statement that two engines equipped with their crew headed last night to Tartous province and to Lattakia countryside to support the firefighting teams there to extinguish the fires erupted in the area.

For his part, Commander of the Firefighting Brigade in Daraa Colonel  Mohammad Mahamid said that two firefighting cars with their crew were sent to Tartous Province to support the firefighting teams in extinguishing fully fires.

In a similar statement to SANA reporter, Director of the Forestry Department in Daraa Agricultural Department Jamil al-Abdullah pointed out that the department sent yesterday firefighting teams consisted of two tanks and their crew to Tartous and Lattakia provinces to support efforts exerted to extinguish fires erupted there. 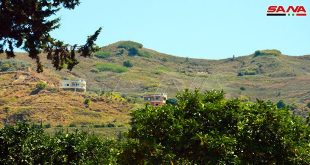 Damascus, SANA-Temperatures slightly will drop to become lower than average as the country is affected …