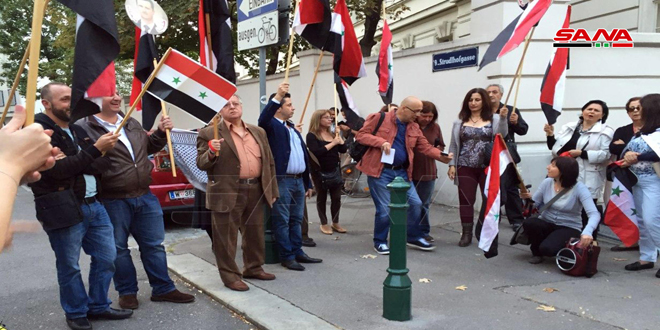 Vienna, SANA- A number of Arab students and Austrian citizens took part in the “Hands Off Syria” initiative, and a solidarity stand with Syria, which were organized by National Union of Syrian Students, Slovakia Branch in front of the EU headquarters in the Austrian capital of Vienna.

In a message handed to EU Deputy Representative in Vienna, the participants in the events confirmed that the unilateral coercive economic measures imposed by the US and some of its allies on Syria are a flagrant violation of international, ethical and humanitarian law, particularly in light of the Corona epidemic.

The message stressed that the unilateral coercive measures endanger peace and stability in the region and the world, represent support for the terrorists and hinder efforts for finding a political solution to the crisis in Syria.

In his turn, the Austrian professor Ernet Hamil and the Austrian scientific researcher Dr. Hubert Kramer condemned the policies of economic blockade aiming at subjugating peoples and governments which reject the external dictations and adhere to the independence of their national decisions.

They criticized the international silence towards those measures which only serve the terrorist groups in Syria, calling for cancelling them as they target the Syrian people. 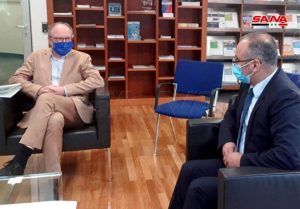 They also called for strengthening the bases of national steadfastness against terrorism, and supporting Syria in confronting the terrorist organizations and the countries supporting them.