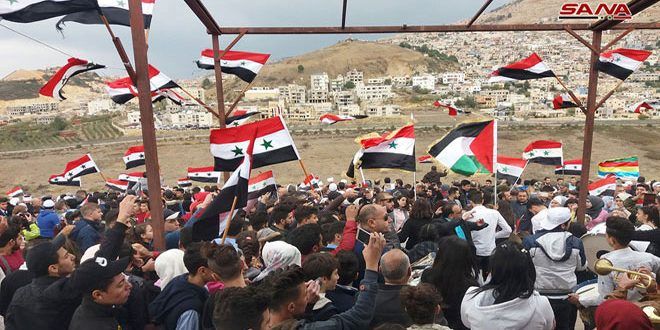 Quneitra, SANA- Syrian citizens in the occupied Syrian Golan affirmed commitment to go on in the march of resilience until liberating the occupied lands and restoring them safe to the lap of the Homeland.

Freed captive, Sidqi al-Maqt, affirmed in a phone call with SANA reporter in Quneitra on the occasion of the 47th anniversary of Tishreen liberation war that citizens of the occupied Golan have confidence in the inevitability of liberating every inch of the occupied lands by the will of the heroes of the Syrian Arab Army who defeated the Zionist- American project and its terrorist mercenaries.

For his part, Said Farhat, saluted the people of Syria, the Syrian heroic army and President Bashar al-Assad, affirming that Tishreen war “ will remain a beacon that gives hope of victory and to liberate the Golan from the Israeli occupation”.

Citizens of the occupied Syrian Golan and Quneitra recall with pride the moments of the victory over the Zionist enemy and the liberation of Quneitra. They are confident in their ability to confront the colonial and terrorist plots being hatched against Syria that aim to undermine the resistance of the Syrian state.