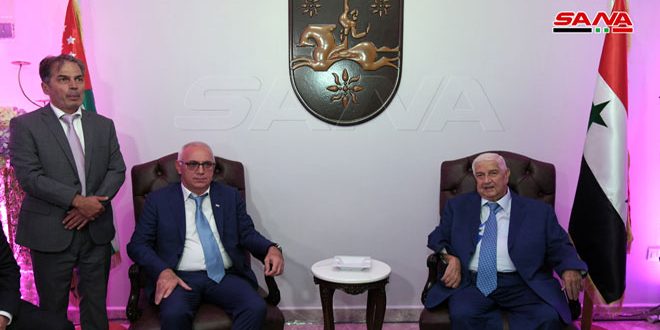 Damascus, SANA_ The Embassy of the Republic of Abkhazia was inaugurated on Tuesday in Damascus and the flag was raised at the embassy.

The opening ceremony has been attended by Deputy Prime Minister, Foreign and Expatriates Minister Walid al-Moallem and a high-ranking Abkhazian delegation paying a visit to Damascus including head of presidential administration Alkhas Kvitsinia, Foreign Minister Daur Vadimovich Kove and other senior officials from both sides.

In a speech during the opening ceremony, ​​Minister Al-Moallem expressed great happiness with the opening of the Embassy in Damascus and the visit of the delegation who held talks on various aspects of developing bilateral relations and showed full support for Syria’s positions.

“The embassy will be the cornerstone in the launch of our bilateral relations in a practical way, and that it may be a step to encourage others who closed their embassies in Damascus to reopen them,” al-Moallem said, expressing readiness to provide all support and assistance to enable the Abkhazian ambassador perform his duties successfully.

Head of the Abkhazian presidential administration Alkhas Kvitsinia , in his speech, reviewed the history of relations between Abkhazia and Syria, starting with mutual recognition in May 2018, the signature of a treaty of friendship and cooperation, two agreements on the establishment of a joint committee for cooperation in various fields and facilitating and developing trade and economic cooperation between the two countries in addition to the establishment of diplomatic relations at the level of embassies.

He touched upon the two countries’ common desire to develop relations in all fields.

Kvitsinia affirmed his confidence that the relations between Syria and Abkahazia will develop on the basis of mutual respect and cooperation, expressing his gratitude to the Syrian friendly people.

Abkhazia’s Foreign Minister also pointed out that Abkhazia, for Syria, is a bridge that opens horizons for cooperation with other countries.

“The opening of the embassy is an important step in developing relations and achieving further cooperation.” He said.

The ambassador of Abkhazia in Damascus Khutaba Bagrat Rashovich talked about the long-term history of relations, stressing that he will work to develop them in a way that achieves the interests of the two countries’ peoples.

Abkhazia Syria 2020-10-06
ghossoun
Share
Previous Under the patronage President al-Assad, a new batch of Military Academy students graduated
Next 17 civilians martyred, tens injured in an explosion of a truck bomb in al-Bab city in Aleppo countryside