Ancient city of Aleppo.. a museum that contains the most amazing areas of the oldest civilizations 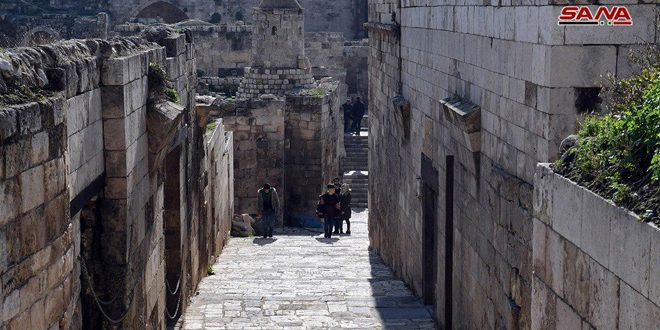 Damascus, SANA- Many archaeologists consider ancient Aleppo as an important museum that includes the most amazing archaeological sites belonging to the oldest civilizations, some of them estimate that the city is eight thousand years old, which made al-Shahba one of the oldest and one of the first cities in the world.

Ancient Aleppo has been included in the UNESCO World Heritage List since 1986 in recognition of its rare Arab architectural styles. Al-Miqdad pointed out to the authenticity of the city and the historical and cultural heritage, as it has all the natural factors, on top, the geographical ones as it sits on a harsh, forced plateau that gave it a high security and provided it with groundwater gain in addition to its moderate climate.

The classical and Hellenistic stages had a sophisticated organizational approach, as the streets’ paths tended to be straight and perpendicular to the points of convergence, which is known as the Greek, the hypodermic or hippodamian plan “chessboard”. When the city was under the control of the Romans in the middle of the first century BC, the Romans found themselves in front civilized people and a bright city, so that they dealt with Aleppo differently from their colonial style, as this led to a remarkable civilizational interaction, which was evident by the arrival of many of the region’s personalities to prominent ranks in the Roman Empire.

Al-Miqdad reviewed the prosperity that Aleppo witnessed in the Islamic era, as it built mosques, khans and markets.

The old organization of Aleppo continued during the Abbasid era without much modification, and Aleppo played the mediating role between Damascus, the old capital, and Baghdad, the new capital, and its strategic role continued as a central city. However, according to Al-Miqdad, the city was prosperous in the era of Saif al-Dawla al-Hamdani, it witnessed a new economic renaissance, but it was also affected by the continuous battles against the Byzantines.

During the era of the Zengids and the Ayyubid , the city witnessed a quantum leap of development that included various prospects of life, its population doubled, the number of its buildings increased, new neighborhoods and khans appeared, the Aleppo wall was repaired, and new doors were opened with a focus on building the castle, attention has also been paid to public facilities.

Aleppo was devastated as a result of the Mongol invasion in 1260 AD and it was the most affected city in the Levant, so the destruction included the walls, markets and the Great Mosque. During the time of the Ottoman occupation, Aleppo’s military and defense status declined, but according to Al-Miqdad, it maintained its economic importance, defying neglect and crises of drought, and became an international trade center benefiting from the growth of its trade with the external world as a link between Asia and Europe.

Despite the systematic sabotage and destruction of old Aleppo during the years of the terrorist war, al-Shahba rises from under the ashes to bandage its wounds and rehabilitate what has been destroyed. 2020-09-17
nisreen
Share
Previous Russia: No stability in the Middle East without settling the Palestinian cause
Next Russian Foreign Ministry: Turkish regime procrastinates carrying out its commitments in Idleb