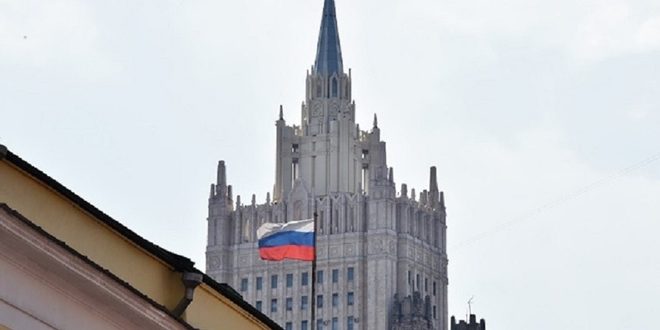 Moscow, SANA- Russian Foreign Ministry stressed that the Turkish regime postpones fulfilling its commitments to the agreement of cessation of hostilities in Idleb province, adding that US-backed QSD militia has been practicing dangerous tricks along with the Americans in stealing the oil resources in Syrian Al-Jazeera.

“Ankara’s fulfillment of its obligations stipulated in the Turkish-Russian memorandum of March 5th , 2020 is being delayed ” Russian Spokeswoman, Maria Zakharova said in a press conference in Moscow.

Russian President, Vladimir Putin, announced at the end of his talks with Head of the Turkish regime on Mar 5th that an agreement of cessation of hostilities in Idleb at the status que was reached, and that this agreement stresses the commitment to Syria’s sovereignty and territorial integrity, along with going ahead in combating terrorism.

Zakharova said that the operations aiming at eliminating Daesh’s remnants in Syrian al-Jazeera and other areas are continuing.

The Russian Spokeswoman noted that US-backed QSD militia has been practicing dangerous tricks along with the Americans and signing illegal agreements aimed at stealing the oil resources in Syrian Al-Jazeera.

On Aug 2nd, Syria condemned with the strongest terms the agreement made by QSD militia and an American oil company to loot the Syrian oil, stressing that the deal is null and has no legal impact.

2020-09-17
Baraa
Share
Previous Ancient city of Aleppo.. a museum that contains the most amazing areas of the oldest civilizations
Next Beijing calls for solving the crisis in Syria through political dialogue