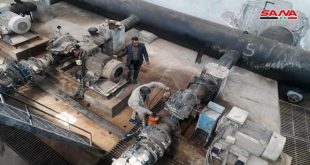 Hasaka, SANA – The maintenance teams from Hasaka Drinking Water Establishment on Monday continued maintenance operations for the wells of Alouk water station in Ras al-Ayn eastern countryside in order to ensure the station is operating at full capacity and reach stability in providing drinking water.

In a statement to SANA reporter, director of Hasaka Water Establishment Mahmoud Oukla affirmed the stability of water pumping from Alouk station to the neighborhoods of Hasaka city and populated areas along the water line, as the Establishment’s workers are supervising and maintaining in the station directly, adding that efforts are underway to put all the wells of the station into service.

Oukla said that 17 wells are continually operating along with 3 pumps, which means that 80% of station is operational, pumping 50 cubic meters of water each day from the wells to Hasaka city according to a specified schedule.