Czech researcher: Cutting off water to Hasaka by Turkish occupation is state terror 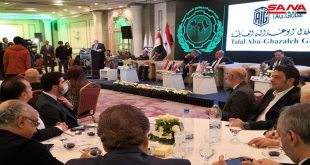 Prague-SANA, Czech scientific researcher, Prof. Vlasta Havelka affirmed that the crime committed by the Turkish occupation and its terrorist militias which is represented in cutting off drinking water to more than a million Syrian citizens in the city of Hasaka and its villages constitutes a state terrorism, a crime against humanity and a flagrant challenge to the sovereignty of Syria and the international laws.

In a statement to the SANA reporter in Prague on Sunday, Havelka stressed that the presence of the Turkish regime forces or any foreign forces on the Syrian territory without the approval of the Syrian government is an illegitimate and illegal presence that threatens the international peace and security.

Havelka criticized the silence of the international community and the double standards adopted by the West towards the crimes committed in Syria by terrorist groups supported by the Turkish regime, pointing out that the terrorist ideas and ideology adopted by these groups represent a challenge and threat to security and stability not only in Syria, but in the whole world.