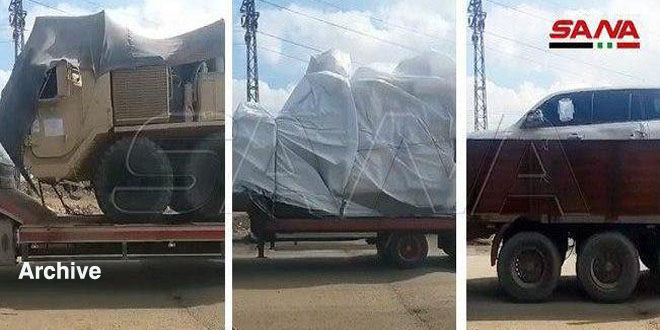 Hasaka, SANA- In a renewed violation of international laws and norms, US occupation forces brought in military vehicles and tanker trucks coming from Iraq through al-Walid illegitimate crossing to support their bases in al-Jazeera region.

Local sources in al-Yarubiya in Hasaka countryside told SANA reporter that last night, the US occupation forces brought in a convoy that consists of 7 vehicles and 4 tanker trucks laden with military equipment and logistic materials, to the Syrian territories coming from Iraq through al-Walid illegitimate crossing.

The sources pointed out that the convoy entered from the Iraqi territories through the illegitimate crossing of al-Walid in al-Yarubiya countryside and it headed towards the US illegitimate base at Khrab al-Jir military airport in al-Malikiyah countryside in the far northeastern countryside of Hasaka.

US occupation brings in new convoy of vehicles to support its illegitimate bases in Hasaka 2020-08-30
ruaa-jazaeri
Share
Previous Temperatures above average, skies clear in general
Next Czech researcher: Cutting off water to Hasaka by Turkish occupation is state terror